In Hindu religion Goddess Durga is worshipped in her different forms. She is worshiped and considered a form of energy – ‘Shakti’.

The three main forms of ‘Shakti’ – Shri Maha Saraswati, Shri Maha Laxmi and Shri Mahakali are formed by three main Gods of Hindu religion – Shri Brahma, Shri Vishnu and Shri Mahesh respectively. Each of these deities also give three more forms each – totaling into nine forms of ‘Shakti’ or Durga. Hence we worship 9 Durga or Nav-Durga. Nav-Durga puja is usually performed in the evening or night of the day and hence the name Navratra.

There are a number of legends to explain why Navratri is celebrated. One of the most famous tales is about goddess Durga killing a demon named Mahishasura. The battle is told to last for nine days, and on the ninth night Durga finally killed the demon. 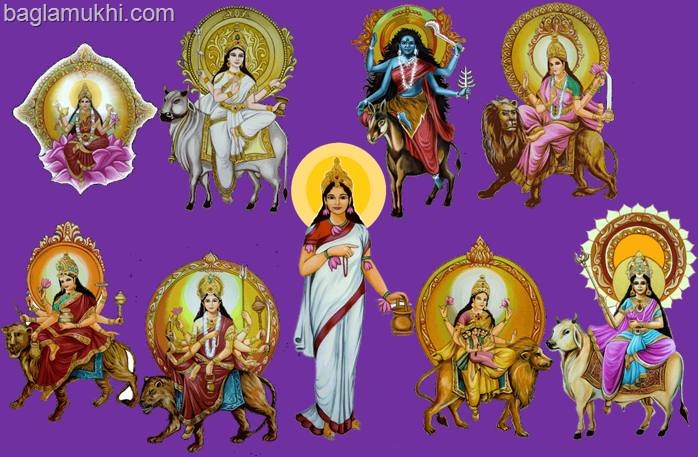 Here are the details of these nine forms of Shakti worship during the Nav-Durga puja. 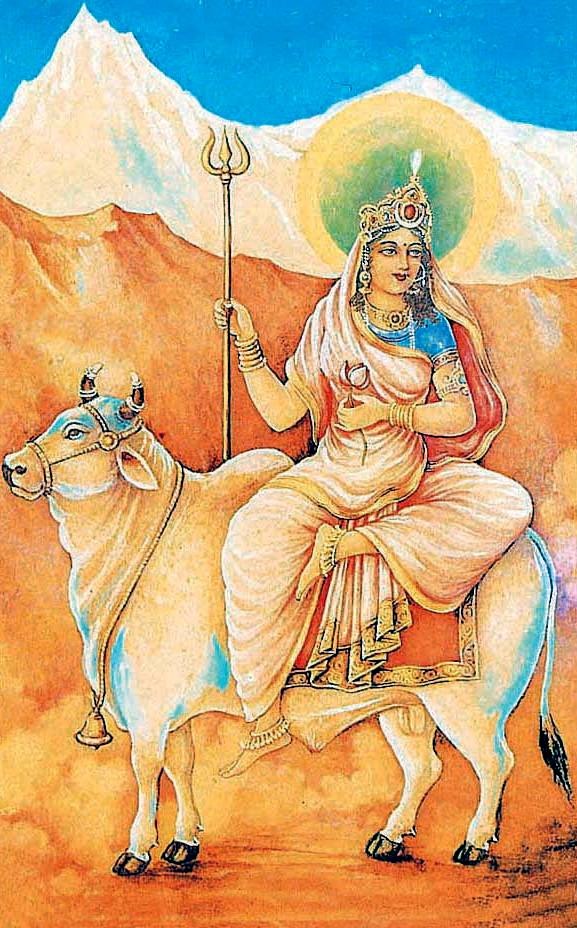 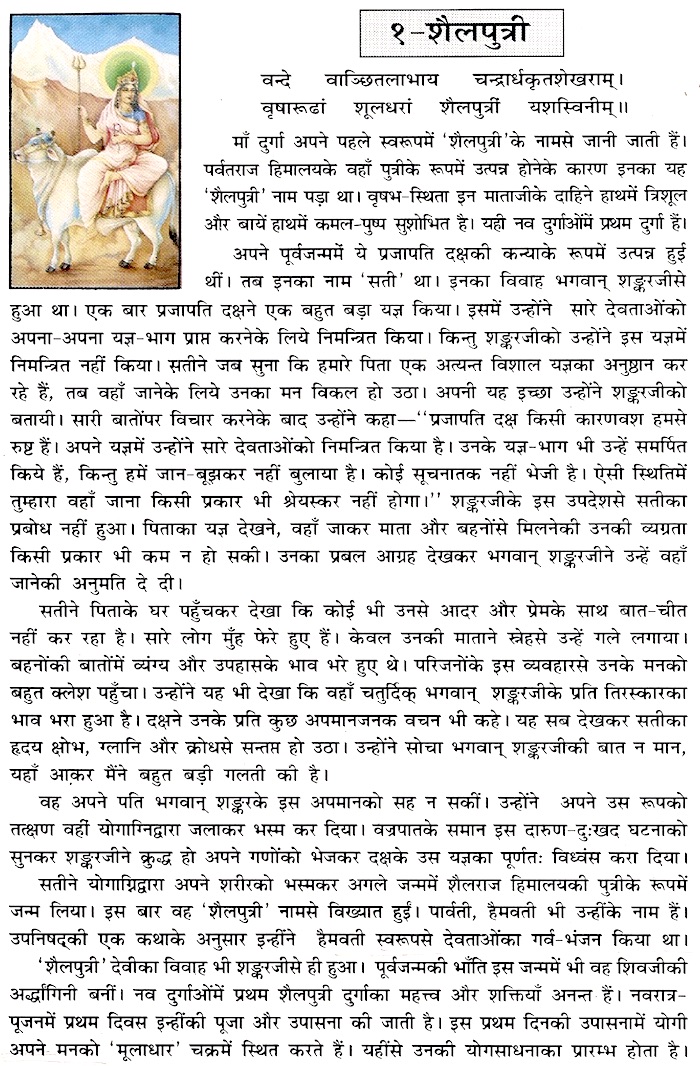 On the second day of Nav-Ratri Brahamacharini Durga is worshipped. Brahma is responsible of observing penance(tapa) and good conduct in people. Brahamcharini is a very gorgeous Goddess with one hand holding a ‘Kumbha’ (water pot) and the other holding a rosary. Brahamacharini personifies love and loyalty, and is she is also the store-house of knowledge and wisdom.

On the third day, Chandraghanta Durga is worshipped. Charming and bright Chandraghanta has a half-circular moon on her forehead. She had ten hands and three eyes and is Golden in color.

There are various weapons on eight of her hands and the remaining two hands display mudras of giving and stopping harm. Two words in the name of this goddess – Chandra  and Ghanta mean supreme bliss and knowledge with peace and serenity.  Chandraghanta’s ride is tiger.

On the fourth night, Kushmanda Durga is worshipped. The goddess Kushmanda has eight arms holding various weapons and a rosary (mala). Kushmanda rides on a tiger and possesses a solar aura. The goddess represents the knowledge of cosmic intricacies. The residence of Kushmanda is Bhimaparvat.

On the fifth night Durga  Skanda Mata is worshiped. The goddess riding a lion has her son skanda on her lap. She has three eyes and four hands. Two of her hands holds lotuses and the other two hands show defending and granting mudras.

On the sixth day of Navratri goddess Katyayani is worshiped. According to a legend, a great sage called Kata who only had a son wished to have a daughter. His desire was granted by Goddess and an avatar of goddess Durga, Katyayani, was born to Kata.

The form of Durga known as Kaalratri is a goddess of color black or blue skin color. She has a lot of hair and 4 hands. Two of her hands are holding a cleaver and a torch. The remaining  two hands feature ‘giving’ and ‘protecting’ gestures. Kaalratri rides donkey and is known as a destroyer of darkness and ignorance.

The goddess Durga worshipped on the eighth day of Durga pooja is called ‘Maha Gauri’. She is white and has four arms. She is often dressed in a white or green sari. She holds a drum and a trident and is often depiected riding a bull.

Ninth Durga, ‘Siddhidatri’ has four arms and is sitting on a lotus and rides a lion. “Siddhi” means power. “Siddhi” can also transform into “Riddhi” (prosperity) and “Buddhi” (intelligence).