Bagalamukhi is one of the ten mahavidyas (great wisdom goddesses) in Hinduism. Bagalamukhi Devi smashes the devotee’s misconceptions and delusions (or the devotee’s enemies) with her cudgel. She is also known as Pitambara Maa in North India. In Datiya District of Madhya Pradesh in 1935 Santa Shree Swami had established Pitambra Shakti Peeth. In India, there is popular belief that, to defeat others in legal dispute or election, they need to get the blessings of Ma Pitambra.

For Bagalamukhi Sadhana, you don’t need to visit the temple. It is better to perform Sadhana under a knowledgeable Guru but, if nobody is around, you can also perform it on your own. Just, make sure that you don’t do any mistakes.

The “Bija Mantra” of Ma Baglamukhi is “Hlreem” (ह्रिं). If you have never done Bagalamukhi Sadhana before then, you should start your Sadhana from this bija mantra. Bija Mantra is chanted on a Haldi (turmeric ) Mala rosary 0f 108 beads. The mantra can be repeated one time, 5 times, 11 times, 21 times or more times.  This bija mantra of protects you from evil powers. This mantra can protect you from people who want to harm you, protect from false court cases and other problems. Bagalamukhi Sadhana is performed for better result to the problems.

Here is the procedure of Bagalamukhi Sadhana:

The Sankalpa is a pledge you make to the goddess Bagalamukhi. There is not a single format but you can take the following text as a guideline of how to prepare your own, personal Sankalpa.

Take water in your hand. Close your eyes and say, “I don’t know much about who my enemies are and who are blocking the way of my progress. I am facing problems in job so, I need your the strength to fight all the negatives and achieve victory. Please help me in overcoming all the problems and gain victory over the problems. Hence, I pledge to pray you for the next [1, 5, 11, 21, or more] days in full devotion. Please take care of all of the problems that come on my way. Jaya Maa Bagalamukhi.” 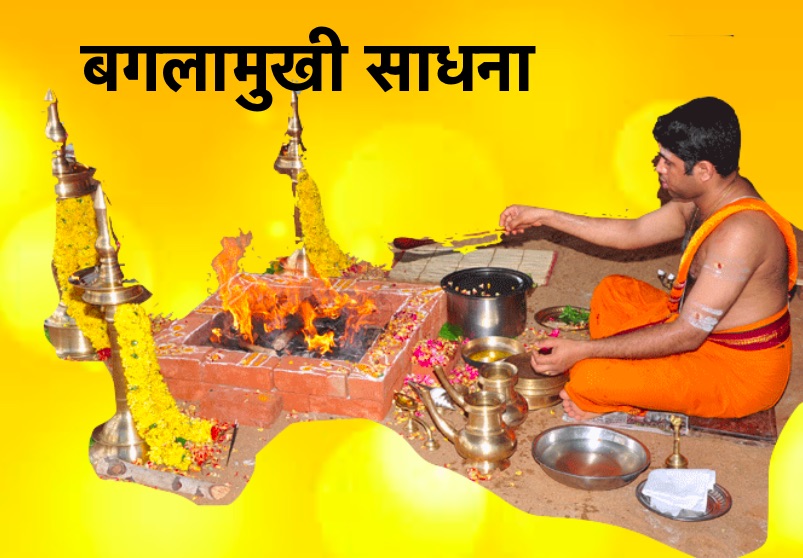