It is believed that there are 10 Mahavidyas. Maha means great and Vidya is wisdom. So, they are the great wisdom goddesses. According to Tantrasasthra, the 10 Mahavidyas are:

These are also believed to be the incarnations of God Vishnu. 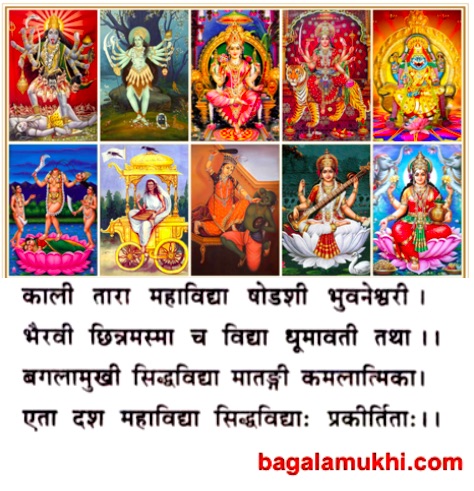 Among them Kali is the first Mahavidya. She is called Aadhya (first in Sanskrit). She is called Kali because she can defeat Kaal (death). She is the ultimate form of Brahman, “Devourer of Time” (Supreme Deity of Kalikula systems)

Tara is the goddess of stars. She is the Goddess as a guide and a protector, or who saves. She offers the ultimate knowledge which gives salvation (also known as Neel Saraswati).

Tripura Sundari (Shodashi) is the Goddess who is “Beautiful in the Three Worlds” (Supreme Deity of Srikula systems); the “Tantric Parvati” or the “Moksha Mukta”.

Bhuwaneshowri is an aspect of Devi or Durga as elements of the physical cosmos in giving shape to the creation of the World.

Bhairavi is the fierce and terrifying Hindu goddess who is the consort of Kala Bhairava.

Chhinnamasta is the self-decapitated Goddess who is depicted usually standing or seated on a divine copulating couple, holding her own severed head in one hand, a scimitar in another. Chhinnamasta is a goddess of contradictions. She symbolises both aspects of Devi: a life-giver and a life-taker.

Dhumavati is the Widow Goddess, or the Goddess of death.

Bagalamukhi is the Goddess who can paralyze the enemies. She is considered one of the most powerful goddess when a person is in trouble.

Matangi is the Prime Minister of Lalita (in Srikula systems); the “Tantric Saraswati”

Kamala is the Lotus Goddess; the “Tantric Lakshmi”