Literary sentences of 14th century Sanskrit “Ramakrishna Viloma Kaavyam” (रामकृष्णविलोमाकाव्यं) by Daivagjna Surya Pandita is a very interesting work of poetry (A rare palindromic poetry). The poetry containing 40 palindromic verses, read as Ramayana one way and as Mahabharata in reverse.

The entire poem can be downloaded here in PDF format from the link posted at the end of this post. 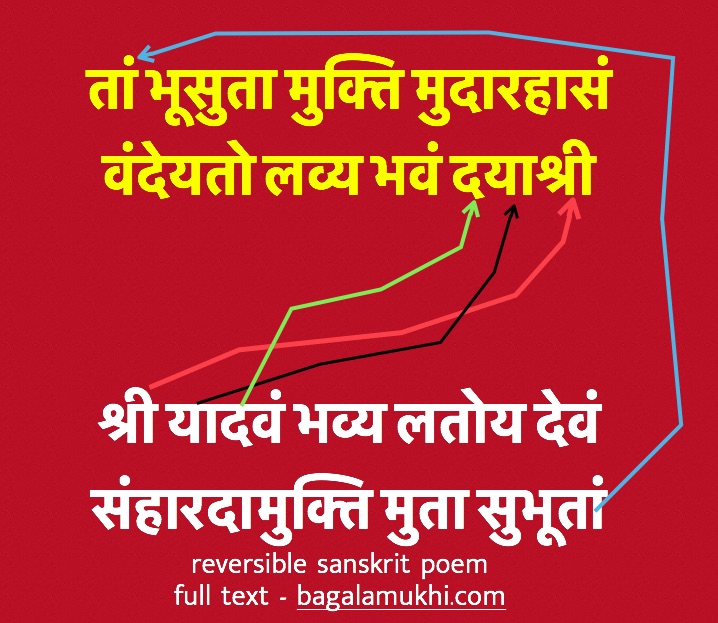 1st sloka meaning: “I pray to Sita, the incarnation of Lakshmi who is affectionate towards a smiling Lava (Sita’s son)”.

2nd sloka meaning: “The teachings of Gita, bestowed upon us by Lord Krishna who draws people towards him with his benevolence, destroy evil and are close to our heart”

“I pay my obeisance to Lord Shri Rama, who with his heart pining for Sita, travelled across the Sahyadri Hills and returned to Ayodhya after killing Ravana and sported with his consort, Sita, in Ayodhya for a long time.”

“I bow to Lord Shri Krishna, whose chest is the sporting resort of Shri Lakshmi;who is fit to be contemplated through penance and sacrifice, who fondles Rukmani and his other consorts and who is worshipped by the gopis, and who is decked with jewels radiating splendour.

Sanskrit is a standardized dialect of Old Indo-Aryan language. The language had originated in the second millennium BCE as Vedic Sanskrit, tracing its linguistic ancestry back to Proto-Indo-Iranian and Proto-Indo-European.

The oldest Indo-European language for which substantial written documentation exists, Sanskrit holds a prominent position in Indo-European studies. The body of Sanskrit literature encompasses a rich tradition of poetry and drama as well as scientific, technical, philosophical and religious texts. The compositions of Sanskrit were orally transmitted for much of its early history by methods of memorization of exceptional complexity, rigor, and fidelity.

Thereafter, variants and derivatives of the Brahmi script came to be used. Sanskrit is normally written in the Devanagari script but, other scripts are also used for writing Sanskrit texts. It is today one of the 22 languages listed in the Eighth Schedule of the Constitution of India, which mandates the Indian government to develop the language. It continues to be widely used as a ceremonial language in Hindu religious rituals and Buddhist practice in the form of hymns and chants. But, very few people use the language for normal communication. According to reports only a few thousand people speak Sanskrit language in the world.

Link to the full poem : http://sanskritdocuments.org/all_pdf/raamakrshhna.pdf

Raghava-yadaviyam by Venkatadhvari (17th cent.) is an “anuloma-viloma kavya” that narrates the story of Rama. But the Shlokas read in the reverse relate an adventure of Shri Krishna.